One more race without a winner at the Vidle Crucible

The Densis Rift   claim the toll of 3! That’s wright! 3! 3 pilots were lost for the wretched warp hole!

The last 2 racers…simple couldn’t withstand such a carnage that refuse to complete the circuit fearing the murderous rift!

Once again…no one survive the DENSIS RIFT!

Starting at the Pole Position, the Starviper jump head of the remaining competitors

At the first turning point, the Starviper closes in, keeping a comfortable advantage over the Tie-Racers

Ups!…Some pilots simple don’t what is needed to run in such a competitive championship

The Rift and his victims! A starviper, a Tie-Racer and an A-Wing being pull through the dreadful breach.

No prize for you! 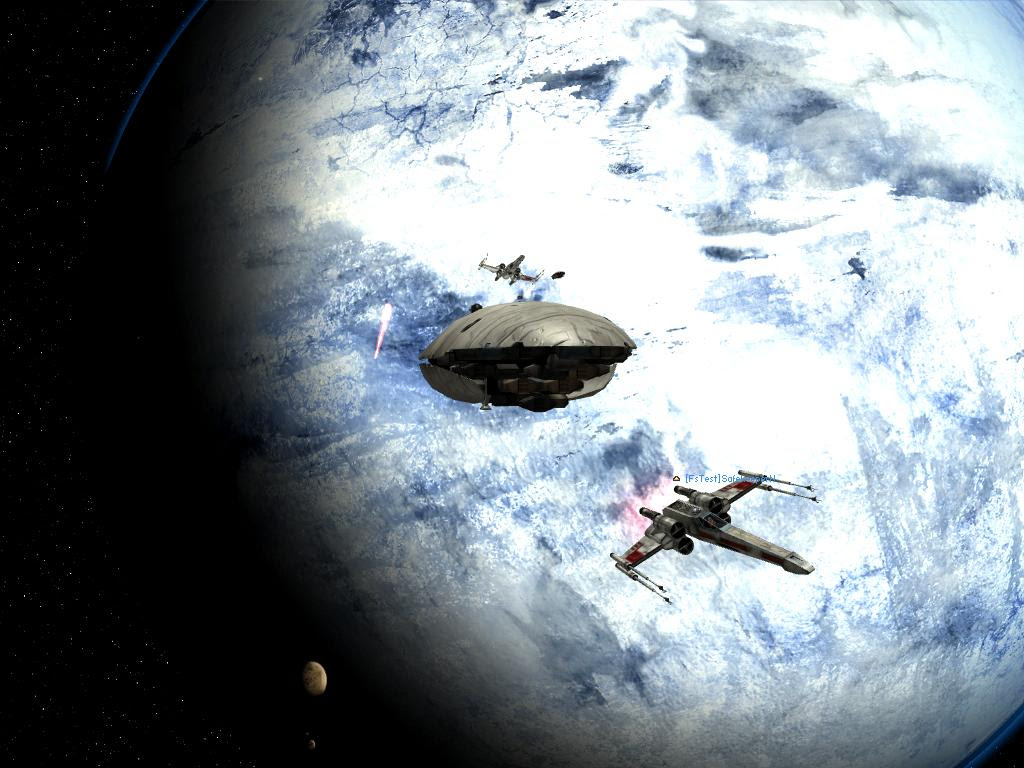 Red Squadron was an Alliance Starfighter Corps X-wing squadron active during the Galactic Civil War. The squadron most famously fought at the Battle of Yavin and Battle of Endor

Red Squadron was stationed aboard the Mon Calamari Star Cruiser Independence during the build up to the Battle of Yavin. Pilots who flew with the squadron included Lieutenant Hamo Blastwell, Keyan Farlander, Samuel Raider and Puck Naeco. Many members were transferred to Yavin Base and reassigned to different squadrons for the Death Star assault.

Red Squadron was cobbled together from pilots from the Dantooine Squadron, the Ecliptic Evaders, and the Tierfon Yellow Aces for the assault on the Death Star. During the battle, Red Squadron gained the distinction of being the unit that brought down the Death Star’s defenses as well as ultimately destroying the station itself. But the victory came at a price. Almost the entire squadron was destroyed, except for two X-wings flown by Luke Skywalker and Wedge Antilles.

Stationed aboard the first Death Star during the Battle of Yavin, Black Squadron was the TIE unit which Vader led into battle against the attacking Rebel snubfighters—the only TIE unit to deploy against the Rebels during the battle. As Moff Tarkin and most of the rest of the Death Star’s chain of command refused to take the threat the Rebellion posed seriously, only the squadron that Vader personally commanded launched—fortunately for the Alliance, as the giant station carried several thousand TIEs that would have easily overwhelmed the few dozen snubfighters the Rebels managed to throw against it. An element of six TIEs attacked the X-wings providing top cover, while Vader himself and two wing guards engaged the ships making the trench run. It is not often appreciated these TIE pilots were significantly outnumbered during the battle, but the members of Black Squadron were among the finest the Empire had to offer: they fought hard, and were responsible for many of the Alliance casualties. “I assure you, Lord Vader. My men are working as fast as they can.” “…Perhaps I can find new ways to motivate them.”

Having joined the forces of the Rebel Alliance, the CR90 “Tie Trasher” must navigate an Imperial mining operation to deliver the transmission and Tibanna Gas to the rebels base.

For the Rebels: The CR90 flees off the Imperial table edge.

For the Galactic Empire: Destory the CR90

At the last minute, the CR90 reach the Imperial table edge, pursued by 8 Imperial ships.

This was truly a EPIC FINAL!

And the Rebels won!…Once again!

This was a initiation campaign for most guys at the club. I tried to grab their attention first with small games and later with the “cinematic experience” of Tantive IV Expansion Set.

It worked! Most of the guys got hooked! 😀

NEXT WEEK: Red Vs Black

Having survived, again, another entanglement with the Galactic Empire, the Captain of the “Tie Trasher” vows to thwart the Empire in whatever way he can.

He volunteer his services to stay near a satellite cluster in order to intercept Imperial communications.

For the Rebels: Destroy All Galactic Empire Ships or flee from the Imperial ambush.

For the Galactic Empire: Destory thef CR90 or all sattelites

The Rebels have emerged relatively unscathed from their initial encounter, but have provoked the ire of the Empire. While stopped at a refueling station, the CR90 is ambushed by the battered remnants of the original TIE patrol bolstered by an elite squadron led by Soontir Fel.

The situation looks bleak for the CR90’s crew until a group of Rebel fighters comes to their defense.

The CR-90 ir refuelling at the time the Black Squadrons appear. With the refuelling container still attached, and running on fume, the corvette fires up, as the station guards are launched to intercept the incoming adversaries.

For the Rebels: Destroy All Galactic Empire Ships or flee from the Imperial ambush.

For the Galactic Empire: Cripple one of CR90 sections.

The full power of the ionization reactor caught unprepared the approaching enemies, unable to dodge the mighty vessel, they crashed, harmlessly, against the hull.

The Rebels won, once again.

1bigos
Create a free website or blog at WordPress.com.